A Nurse-Led Intervention to Address Food Insecurity in Chicago

Food insecurity is a social issue that is becoming more common across the nation. Individuals identified as food insecure may not have enough food in quantity and/or quality, and they may likely have limited access to obtain the food they need. Food insecurity is one social determinant of health, or a social condition that impacts a person’s good health. This article offers a brief overview of food insecurity and describes The Rush Surplus Project, developed in 2015 by concerned nurses within the Rush healthcare system to address the issue of food insecurity in surrounding communities on the west side of Chicago, Illinois. This project decreases hospital food waste by donating food to local shelters for redistribution to individuals in need. The authors offer implications for nursing and health systems concerned with food insecurity and conclude with a summary detailing next steps in progress at Rush University Medical Center.

The World Health Organization (2018) defines the Social Determinants of Health (SDOH) as conditions in which people are born, grow, live, work and age that impact their health. These social determinants are mostly responsible for health inequities, or unfair and unavoidable differences in health status seen within and between countries (WHO, 2018). For the purpose of this article, we consider food insecurity, one SDOH, and describe a nurse led initiative designed to address this concern in one of Chicago’s underserved communities.

Levels of Food Security
... in reality, food insecurity refers to more than just not having food. The Figure depicts the four distinct levels associated with food security (Feeding America, 2018). The top level, High Food Security, encompasses households that have no concerns with supply and access to food. The next level, Marginal Food Security, includes households which have encountered issues and anxiety related to the accessibility of food, but when they do have food it is of great quality with many options. These two levels are considered food secure. The next level, Low Food Security, includes households with poor quality and variety in food options, but the ability to eat adequate amounts of food on a routine basis. The lowest level, Very Low Food Security, includes people within the household who did not have enough money or resources to obtain food and this affected their diet and the amount of food they were able to consume throughout the year. Segments of the population in these final two categories fall into the food insecure category. 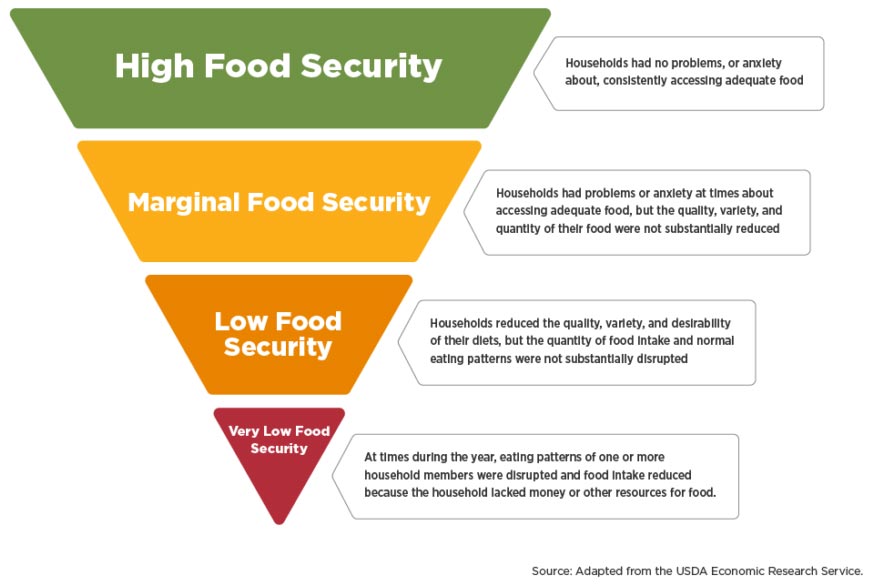 Many individuals and families have enrolled in the Supplemental Nutrition Assistance Program (SNAP), a federally funded program to provide resources for participants to purchase food in specific stores. The type and amount of benefits an individual can receive from SNAP are based on household and overall monthly income. For example, an individual with a lower income, living in a family unit with three other dependent individuals (whether they are children or seniors) would potentially qualify for this program based on the income they receive. Each state has a different policy and guidelines regarding how much assistance people can receive. Additionally, expenses people have to deal with beyond rent can lead to a need for additional help from SNAP benefits.

Organizations, governments, and individuals across the country waste an estimated 30-40% of the American food supply (Schroeder & Smaldone, 2016). Many initiatives have emerged to reduce waste, including diverting excess edible food to hunger relief efforts. The next section will describe an exemplar of a program to address food insecurity at the local level.

The American Hospital Association (AHA) (2017) has called upon its members to get involved in addressing food insecurity. Hospitals and health systems have begun to address this issue by using their own resources to ameliorate this growing concern. Some hospitals provide meals, while others provide food to individuals in the community (AHA, 2017). The AHA (n.d.) provides guidance for hospitals and health systems who wish to address food insecurity for patients and targeted communities. A detailed description of these resources is located on their webpage entitled, Community Health Initiatives at the American Hospital Association.

The Rush Surplus Project seeks to simultaneously reduce food waste and food insecurity throughout Cook County, IL through the development of a replicable and sustainable model to redistribute unserved cafeteria food to local families and individuals in need, while simultaneously operating as a model of service efficiency and environmental sustainability. The Rush Surplus Project is an innovative way to reduce commercial food waste and increase the amount of safe, nutritious food for those in our community who struggle with hunger. Notably, this project answers the call to action issued by the AHA (2017).

Evolution and Expansion
Rush University Medical Center (RUMC) is an academic medical center located in Chicago, Illinois, with a patient bed capacity of 664. The hospital facilities are for adults and children, along with an attached 61 bed rehabilitation center. In 2017, Practice Greenhealth, a nonprofit promoting environmental stewardship in healthcare, collaborated with Chicago-based Feeding America (2018), a hunger-relief organization, to encourage hospitals and healthcare facilities nationwide to donate excess resources to food banks. Food insecurity and chronic homelessness are prevalent in under resourced communities on the West Side of Chicago, all within our area of service. Conservative estimates indicate that on a daily basis, 6,200 individuals in Chicago are homeless. Findings from Feeding America’s Map the Meal Gap survey revealed that there are approximately 729,020 food insecure individuals in Cook County alone (Feeding America, 2018). With awareness of these statistics, the creators of The Rush Surplus Project expanded the project to RUMC due to the increased need. In order to expand the project successfully, new partners in the community were created.

Implications for Nursing and Health Systems

Addressing food insecurity can have a great impact on the patient experience and patient outcomes. If food insecurity is managed and addressed, perhaps people may feel more empowered and willing to make improvements in their lifestyle choices.

Summary and Next Steps

Overall, food insecurity is a national problem that continues to grow. The Rush Surplus Project strives to minimize food waste from our institutions and utilize it in a positive way to help decrease food insecurity in the community. The decrease in food insecurity is only a first step in solving just one SDOH. Imagine the possibilities if all of the social determinants of health had solutions.

Currently, RUMC is preparing to open their own food pantry; the Food is Medicine initiative targets inpatients who screen positive for food insecurity. Patients will be screened for food insecurity upon admission, using a SDOH screening tool. The Food is Medicine Program will help to ensure that patients designated as food insecure have food to take home upon discharge, and ensure that they are provided resources to continue to meet their needs.

We would like to extend sincere gratitude to Janice Phillips, PhD, RN, CENP, FAAN, Director of Nursing Research and Healthy Equity, Rush University Medical Center and Angelique Richard, PhD, RN, CENP, Chief Nurse Executive, Rush University Medical Center, for continued support and guidance through implementation and expansion of this project. We would also like to thank all of the individuals who have volunteered time helping to package and deliver the food.

Dr. Grenier has been a Rush nurse for the past 19 years, starting as a nursing assistant, and now as a Director of Nursing for Inpatient Rehab. She received a Doctorate of Nursing Practice in Systems Leadership from Rush University in 2017. She is the founder of the Rush Surplus Project and has been working hard to expand the project to other organizations.

Ms. Wynn has been a Rush nurse for six years, starting as a new graduate nurse, and currently as the Assistant Unit Director of a post-surgical care unit specializing in Spine Surgery and Ear Nose and Throat surgeries. She is currently enrolled at Rush University, working towards a doctorate in Transformative Leadership. She has been part of the Rush Surplus Project since its inception in 2015.