A Report for All Nurses

Advancing the Academic Health System for the Future, written by Enders and Conroy (2014) and published by the Association of American Medical Colleges (AAMC), anticipated that all components of academic medical centers will be transformed in the future. Specifically, the AAMC anticipated that changes will occur in care delivery, the manner in which students are educated, the organization and funding of research, and further integration of the missions of health systems and academic institutions. Although this widely shared report focused on advancing the academic health system, one group that was glaringly absent from the report was that of nursing. It became clear that a companion report, describing the role of nursing and academic health systems of the future, was needed.

In February of 2015 the Board of Directors of the American Association of Colleges of Nursing (AACN) selected Manatt Health to conduct a study addressing the role of academic nursing in the current era of healthcare transformation. This study report, titled Advancing Healthcare Transformation: A New Era for Academic Nursing, was published by the AACN in 2016. The report, subsequently referred to as Advancing Healthcare Transformation, noted that academic nursing “encompasses the integration of practice, education and research within baccalaureate and graduate schools of nursing" (AACN, 2016, p.5). It is important to note that the term 'academic nursing' does NOT apply only to schools/college of nursing within Academic Health Centers (which are much fewer in number than schools/colleges of nursing not affiliated with Academic Health Centers). Rather this term encompasses all schools/colleges of nursing that have baccalaureate and higher degree programs.

Partnerships between nursing academic institutions and healthcare systems are crucial for advancing the quality of care, expanding nursing leadership opportunities, and enhancing student experiences. A total of fifty-four individuals were interviewed by Manatt Health in either one-on-one or group settings. Interviewees included nursing school deans, medical school deans, health system CNOs and CEOs, and university chancellors/vice chancellors in both academic health centers and also non-academic, health-center-affiliated institutions. Findings from the interviews formed the basis for a national summit of academic health center leaders convened by AACN and Manatt Health in August of 2015. This was followed by two surveys of academic health center leaders. Findings provide compelling guidance for schools/colleges, universities, and health systems regarding best approaches for further alignment of their education, practice and service missions. Analysis of the data from these interviews led to the following conclusions:

(a) Academic nursing is not positioned as a partner in healthcare transformation
(b) Institutional leaders recognize the missed opportunity for alignment with academic nursing and are seeking a new approach
(c) Insufficient resources are a barrier to supporting a significantly enhanced role for academic nursing (AACN, 2016, p. 2)

The six major recommendations that were made to enhance partnerships between academic nursing and health systems are presented in the Figure below. 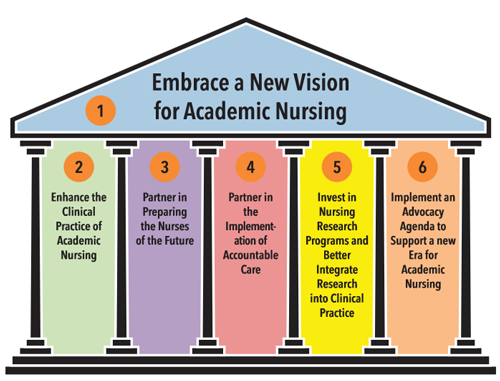 Figure used with permission from AACN.

The goal is for all institutions to adopt the vision that"academic nursing is a full partner in healthcare delivery, education and research that is integrated and funded across all professions and missions in the Academic Health System" (AACN, p.3).

To date, however, a number of very pressing issues impede progress in achieving this goal as described below. It is particularly disheartening that only 6% of hospital boards have nurse representation, compared to 20% of boards with physician representation (Van Dyke, Combes, & Joshi, 2011). Representation of healthcare partners on school/college of nursing advisory boards and academic nurse leader representation on hospital boards aligns institutional leaders and leverages the opportunity for open communication and participation in governance. Although Robert Wood Johnson and other organizations have rightfully been focused on increasing the number of nurses on boards, this effort has focused on nurses serving on a variety of boards. It is our opinion that a national campaign should be launched to increase the number of nurses on hospital and health system boards, increasing the number of nurses serving on these boards to 20% by 2020.

Another area in which academic nursing can strengthen healthcare system initiatives is in the area of population health initiatives in hospitals and health systems. To date, while there has been some integration of nurses in service into population health initiatives, there has been very little integration of academic nursing into health system/hospital population health initiatives. Furthermore, having nursing faculty support clinical partners in translating evidence-based practice could significantly impact quality indicators, patient satisfaction, and chronic disease management models. Strengthening research courses and capstone projects to be more robust will better equip nurses to transform patient outcomes in both practice and community settings. Enlarging the perspective on how schools/colleges can transform healthcare may generate new opportunities in areassuch as research, risk management, and quality improvement.

Most nursing deans, directors and faculty are not in leadership positions in health systems, either in clinical nursing areas or on health system executive teams. Again, deans and faculty in medical schools are often key members of the health system executive team and the clinical medical enterprise. Health systems have traditionally helped fund colleges of medicine largely based on clinical income generated by physicians who hold dual appointments. Academic nursing, which remains primarily dependent on tuition dollars, would surely benefit from health system funding for the care provided by our thousands of undergraduate and graduate students, as well as care provided by our expert faculty clinicians. Some schools have established joint faculty appointments. Although this is more challenging for smaller schools with smaller faculty numbers, many schools do have advanced practice faculty who have workload release time to practice in acute and ambulatory settings of healthcare systems using various salary models. Others have joint appointments that allow nurses at the bedside to teach. With some schools/colleges moving toward 12-month contracts, this is an area ripe for continued innovative thought. For example, joint appointments that allow faculty to practice without creating a strain on their faculty role could be created.

What should you do to advance this goal? We suggest that all organizations immediately assess where their organizations are with respect to the recommendations of the AACN report in-order-to achieve the vision of academic nursing as a full partner in education, healthcare delivery and research.You can do your self-assessment by using the following tools developed by AACN: Self-Assessment Worksheet.pdf and Assessment Scoring.pdf.The assessment can be the starting point of serious discussion amongst your stakeholders for developing a plan to implement these recommendations.

Dr. Glazer is Dean of the College of Nursing and Associate Vice President for Health Affairs at the University of Cincinnati. A nationally recognized leader in nursing education, Dr. Glazer has a strong history of developing community, national, and international partnerships and securing federal funding for nursing research, scholarship and program implementation. In recognition for her work as researcher, educator and healthcare leader, Dr. Glazer has received significant honors and awards. She holds a bachelor's degree in nursing from the University of Michigan in Ann Arbor, MI, and master's and PhD degrees in nursing from Case Western Reserve University in Cleveland, OH.

Lepaine Sharp-McHenry currently serves as Dean of Oklahoma Baptist University College of Nursing in Shawnee, OK. She has served previously as Assistant Director of the Eleanor Mann School of Nursing at the University of Arkansas in Fayetteville, AR and as nursing faculty in both graduate and undergraduate nursing programs. Dr. Sharp-McHenry's doctorate in nursing practice included a specialty in executive leadership from Union University in Jackson, TN. Her clinical practice has included medial surgical nursing, long term care, adult psychiatry, staff development, adult addictive disease, children’s/adolescent psychiatry, and human resources. This diverse background has afford her the opportunity to work in nursing practice, regulation, and education.

Figure used with permission from AACN.