Still other authors suggest a redefinition of cultural competence (Chiarenza, 2012; Koehn & Swick, 2006). Chiarenza urged HCPs to modify the way the concept of culture is used in healthcare to include not only ethnicity and race, but also intersections of ethnicity, race, gender, age, class, education, religion, sexual orientation, and physical ability, along with the unequal distribution of power and the existence of social inequities. Furthermore, Koehn and Swick (2016) proposed to redefine cultural competence by expanding it to include a transnational perspective. This broadens the scope of cultural competence by offering five skill domains. These domains are derived from the fields of international relations, specifically, cross-cultural psychology, and intercultural communication, namely analytic, emotional, creative, communicative, and functional.

As HCPs enter into the process, it is necessary to reframe the concept of humility. While the literature suggests that HCPs operate from a demeanor of humility, there is said to be a paradox in possessing humility. Scholars have asserted that when we become aware of our humility and openly acknowledge it, we’ve lost it (Campinha-Bacote, 2013; Robinson & Alfano 2016). Furthermore, Robinson and Alfano (2016) maintain that humility is fraught with contradiction because one cannot truthfully claim to be humble. Theses authors maintain that by consciously striving to become humble, one might become less so, since humility supposedly is an asset that one can have only by not paying attention to it. From this perspective it begs the question: “Is it possible to seek or learn cultural humility?“ From a cultural competemility framework, it is conceivable.

...by consciously striving to become humble, one might become less so, since humility supposedly is an asset that one can have only by not paying attention to it. Drawing from the field of theology, Ells (n.d.) and Campinha-Bacote (2013) argue that there are theological ways to humble oneself. Ells (n.d.) provides examples which include accepting a lowly place; receiving correction and feedback from others graciously; choosing to serve others; being quick to forgive; cultivating a grateful heart; purposely speaking well of others; and acknowledging wrongdoings to others. Therefore, cultural humility is an attitude of relating to patients; it has more to do with the HCPs' actions and the ends to which they are directed. As eloquently stated by author Rick Warren (2012), “This is true humility: not thinking less of ourselves but thinking of ourselves less” (p. 265). 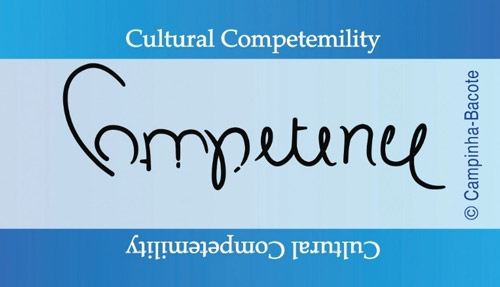 In contrast, conscious impermeability is the awareness that cultural humility must be exhibited during the clinical encounter; however, the HCP is unable to successfully display the cultural lens and demeanor of culturally humility. Here, the HCP becomes keenly aware of the need for cultural humility by attending a workshop, reading an article or book on the topic, or discussing the topic with colleagues, but is not able to grasp the concept of how to personally demonstrate cultural humility. Conscious permeability, however, is the mindful act of learning how to become culturally humble and to let this cultural lens pervade the entire cultural encounter with the patient.

Conscious permeability... is the mindful act of learning how to become culturally humble...Finally, unconscious permeability is the ability of the HCP to spontaneously operate from a place of cultural humility when pursuing cultural awareness, cultural knowledge, and obtaining cultural skill and cultural desire, as well as entering into cultural encounters. In other words, the healthcare professional does not rely on specific rules to maintain a humble attitude, but rather has developed an intuitive grasp of needed interactions and behaviors that demonstrate cultural humility to the patient. From a continuum perspective, cultural competemility can be regarded as the ongoing process of moving from a position of unconscious impermeability to unconscious permeability when cultural awareness, cultural knowledge, cultural skill, cultural encounters, and cultural desire are being pursued. Below, each of these five components of cultural competence will be defined and strategies on how to allow cultural humility to permeate each component will be discussed.

The Process of Permeation

The most serious barrier to cultural competemility is not a lack of knowledge of the details of any given cultural orientation, but rather the potential to stereotype individuals. Intra-cultural variation refers to the variation that is noted within cultural groups, as well as the expected variation that exists across cultural groups. No individual is a stereotype of one’s culture of origin, but rather a unique blend of the diversity found within each culture, an accumulation of life experiences, and the process of acculturation to other cultures.

The infusion of cultural humility into cultural knowledge allows meaningful and deliberate cultural encounters to connect with the patient as a unique, individual person, and not a stereotype of the patient’s cultural group. Cultural competemility necessitates a consciousness of the limits of one's knowledge, including sensitivity to circumstances in which one's native egocentrism is likely to function self-deceptively and limit one's viewpoint (Foundation for Critical Thinking, 1996).

Cultural skill is the ability to conduct a cultural assessment to collect relevant cultural data regarding the patients whom one serves (Campinha-Bacote, 2011). Cultural humility is infused into this construct by conducting a cultural assessment that requires more than selecting a tool and asking the patient questions listed. The healthcare professional’s approach must be done in a culturally sensitive manner. To infuse cultural humility into cultural skill, it is suggested that HCPs listen with interest and remain non-judgmental about what they hear. Boesen (2012) offers the following acronym as a guide to ‘ASSESS’ how to develop consistent cultural humility: Ask questions in a humble, safe manner; Seek self-awareness; Suspend judgment; Express kindness and compassion; Support a safe and welcoming environment; and Start where the patient is at.

...it is suggested that HCPs listen with interest and remain non-judgmental about what they hear. Another approach to gain insight and understand another’s culture is the process of ‘passing over and coming back’ (Dunne, 1972). ‘Passing over’ refers to shifting to the standpoint of another culture, another way of life, another way of seeing an issue. It is followed by an equal and opposite process of ‘coming back’ with new insight. We enter (pass over) into the feelings of our patients by allowing them to share their cultural traditions. We then come back to the world of our own cultural traditions with new insight into the patient’s worldview, thus allowing us to formulate a mutually acceptable and culturally relevant treatment regimen. Dunne (1972) noted that the process of passing over rests on the recognition that no matter what one already knows, there is always more to know, for no standpoint can be the endpoint. Thus, passing over to another world is possible for us because we share common experiences of being humans.

Cultural encounters encourage the HCP to directly engage in face-to-face interactions and other types of encounters with patients from culturally diverse backgrounds to modify existing beliefs about a cultural group and prevent possible stereotyping (Campinha-Bacote, 2011). Continuous cultural encounters are needed to acquire cultural awareness, cultural knowledge, cultural skill, and cultural desire. Cultural humility permeates the cultural encounter as the HCP becomes mindful both that every encounter is an opportunity for inquisitiveness, self-reflection, critique, and life-long learning, and also that maintaining an open heart and mind are necessary (Fahlberg, Foronda, & Baptiste, 2016).

Cultural desire is the motivation of the HCP to ‘want to’ (as opposted to 'have to') engage in the process both of becoming culturally aware, culturally knowledgeable, culturally skillful, and also seeking cultural encounters (Campinha-Bacote, 2011). This form of motivation requires passion. Wilkerson (2002) asserted that true passion is born of anguish and added that “Anguish means extreme pain and distress; The emotions so stirred that it becomes painful, acute deeply felt inner pain, because of conditions about you, in you, or around you” (p. 7). Healthcare professionals must become anguished at the social justice issues facing our growing culturally diverse world and the severe inequalities that exist in healthcare. We must not forget the Institute of Medicine’s landmark report (Smedley, Stith, & Nelson, 2002) which revealed that ethnic minorities in the United States are less likely to receive medical care and experience lower quality of healthcare services .

Similarly, in 2001, the Surgeon General’s report on race, culture and ethnicity and mental health documented racial and ethnic disparities in mental healthcare surrounding issues of misdiagnosis, underutilization, overrepresentation, and improper treatment (U.S. Department of Health and Human Services, 2001). Explanations are multifaceted; however, there is evidence to support (Beach, Rosner, Cooper, Duggan, & Shatzer, 2007; Betancourt, Corbett, & Bondaryk, 2014) that these racial and ethnic disparities are related to the lack of cultural competemility among HCPs. These landmark reports must evoke in us enough passion to ‘want to’ engage in the process of cultural competemility. However, passion must be tempered with a cultural humility lens. Passion drives us forward, and a lens of cultural humility will keep us focused.

A cultural humility lens of cultural desire dictates an understanding of social inequalities and how they affect individuals. When cultural humility saturates the cultural desire of HCPs, there becomes a profound commitment to social justice actions. Healthcare professionals will then realize that views they hold about patients and their everyday interactions with patients and with one another can either contribute to socially just actions or reproduce social injustices (Anderson et al., 2009). Research continues to demonstrate a direct correlation between inequality and negative health outcomes. It is because of this link that healthcare professionals must consciously connect cultural competemility with social justice.

The literature has argued that a focus on developing a culturally competent healthcare workforce, though well intended, has resulted in an unintentional over-emphasis on shared group characteristics; an undervaluing of unique differences of individuals; a failure to address the privilege and power imbalances between providers and clients; an unbalanced focus on knowledge acquisition; and a misuse of the concept of culture as a substitution for minority and/or racial/ethnic group identity(Fisher-Borne et al., 2015; Prasad et al, 2016; Tervalon & Murray-Garcia, 1998). Strategies to address these issues have revolved around introducing the concept of cultural humility and its various relationships with cultural competence. This article offers new insight into this relationship by proposing a synergistic relationship between cultural competence and cultural humility to create the process of cultural competemility. This approach has the potential to further contribute to this body of literature.

Chiarenza, A. (2012). “Developments in the concept of ‘cultural competence.’” In D. Ingleby, A. Chiarenza, W. Devillé, and I. Kotsioni (Eds.), Inequalities in health care for migrants and ethnic minorities (pp. 66-81). Antwerp: Garant

Ells, A. (n.d.) What does the bible say about humility? Counselor's Corner, 2(12). Retrieved from https://bibleresources.org/humility/

Hauka, L. (2017, Dec 6). The sweetness of holding space for another. HuffPost. Retrieved from https://www.huffingtonpost.com/lynn-hauka/the-sweetness-of-holding-_b_9558266.html

Smedley, B., Stith, A., and Nelson, A. (2002). Unequal treatment: Confronting racial and ethnic disparities in health care. Board on Health Sciences Policy. Institute of Medicine. Washington, DC: National Academic Press.

Warren, R. (2012).The purpose driven life: What on earth am I here for? Grand Rapids, MI: Zondervan.

Citation: Campinha-Bacote, J., (December 4, 2018) "Cultural Competemility: A Paradigm Shift in the Cultural Competence versus Cultural Humility Debate – Part I" OJIN: The Online Journal of Issues in Nursing Vol. 24, No. 1.