The team completed a literature review based upon the following PICO question: Does the implementation of BSR as compared to standard shift report at the nurses’ station increase patient safety and patient and nurse satisfaction? The practice of shift report at the bedside is not a new concept and is well documented in the literature. Numerous studies support the positive impact of BSR on patient fall rates, as well as patient and nurse satisfaction (Cairns, Dudjak, Hoffman, & Lorenz, 2013; Evans, Grunawalt, McClish, Wood, & Friese, 2012; Jeffs et al., 2013; Laws, & Amato, 2010; & Sand-Jecklin & Sherman, 2013).

An organizational assessment completed using the strengths-weaknesses-opportunities-threats (SWOT) format revealed that the practice change to BSR was feasible and congruent with the hospital’s nursing model, Jean Watson’s theory of transpersonal caring (Watson, 1999), and Kristen Swanson’s middle range theory of caring (Swanson, 1993). The team selected the Iowa Model of Evidence-Based Practice to Promote Quality Care (Titler, 2011) and Kotter’s Eight Stage Process for Major Change (Kotter, 1996) to guide implementation and sustain progress. Tests of change in Plan, Do, Study, Act (PDSA) cycles were used to evaluate the practice change in real-time and make necessary adjustments throughout implementation (The Deming Institute, n.d.).

Three units were selected for implementation of the practice change based upon the directors’ desire and willingness to participate. The populations served on the chosen nursing units were patients undergoing general surgery, and those with orthopedic and neuroscience diagnoses. Members of these units volunteered to be part of the BSR team.

Education
Staff education included reading two journal articles (Cairnes, Dudjak, Hoffman, & Lorenz, 2013, and Evans, Grunawalt, McClish, Wood, & Friese, 2012), and watching a recorded clip created by the team (six staff nurses, two directors, two video personnel) to demonstrate the BSR process. The clip utilized the scripts used in the training of staff. Educators helped to determine the information that should be shared confidentially via nurse-to-nurse communication and what was to be included in BSR.

One example of a linked change that occurred was script changes based upon the patient; nurse familiarity with the history; and management of patient requests for privacy. Staff members were encouraged to discuss BSR process issues with BSR team members, who made frequent rounds throughout the project. To maintain consistency, suggested changes were discussed with BSR team members prior to implementation. Most requested changes were minor, such as asking patients how they would prefer to be addressed by staff. Changes were passed on to other nurses during unit rounds or through directors and champions at change of shift report.

Nurse satisfaction with the report process was determined using surveys adapted with permission from previously published tools (Cairns et al. 2013; Evans et al. 2012). To assure question clarity and relevance of the project, surveys were completed by six members of the BSR team, three directors, and three staff. The baseline appraisal was an anonymous, six-question survey that employed a five-item Likert scale (5-strongly agree to 1-strongly disagree). The post-implementation survey asked the same six questions, plus an additional question about the top concern since BSR implementation. Participants were given pre-determined choices of increased time, patient confidentiality, convenience, or were permitted to write comments. Nurses providing care on the three units were invited to complete the electronic survey via email and in-person invitation.

All nursing staff members (n=67) completed education prior to implementation of BSR. Performance audits of staff adherence to the tenets of the BSR process while giving report were completed on the three nursing units. The audit results revealed a combined compliance rate of 94% (n= 157). Overall time of the shift report, from the time the first nurse started report until all nurses had completed report, was measured pre-implementation and post-implementation of BSR. A total of 94 shift reports, 46 before and 48 after BSR implementation, were observed and timed. There was no statistically significant difference between mean time for report before and after implementation of BSR. Actual times for report were as follows: general surgery unit: 35.1 pre and 35.1 post; orthopedic unit: 31.5 pre and 29.6 post; and neuroscience unit: 51.8 pre and 51.6 post.

Patient falls decreased by 24% in the four months after BSR implementation compared to pre-implementation falls. The orthopedic unit experienced the greatest reduction in the number of falls at 55.6%, followed by the neuroscience unit at 16.9%, and the general surgery unit at a 6.9% reduction. Patient falls results are presented in Figure 3. 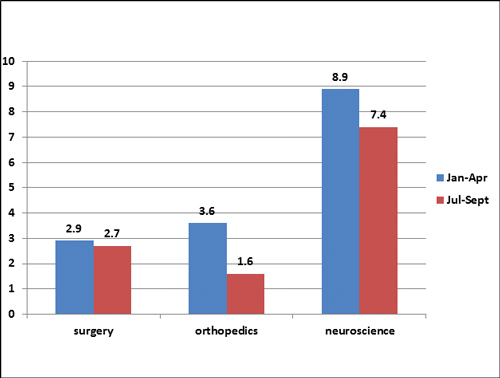 Figure 4 represents all three units’ scores, demonstrating improvement in patient satisfaction as measured by Press Ganey scores. Only the general surgery unit had statistically significant (p = 0.03) improvement in patient satisfaction after implementation of BSR with the average Press Ganey® score for the eight questions producing a result that increased from average score 87.7% to 91.6%. HCAHPS showed improvement, but the changes were not statistically significant. 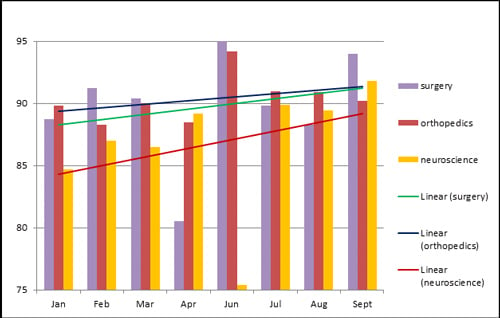 Sixty-four (95%) of the nurses completed the pre- implementation survey, and fifty-seven (85%) completed the post survey. Table 2 represents the number of nurses who reported having enough time for report was significantly decreased, from 80% pre BSR to 59.6% after implementation of BSR (p = 0.008). In the post survey, staff members were able to express concerns about BSR; 70% (n = 45) of the nurses who responded to this question believed that BSR increased the time it took to individually give and receive report. Thirty-nine percent (n=25) of staff reported concerns about patient confidentiality; 44% (n=29) responded that BSR was inconvenient for nurses due to many factors (e.g., multiple nurses needing report, patient requests delayed report, and nurses preferring the status quo).

Despite the perception that report took longer, many nurses commented that the extra time was worth it because they recognized the value of BSR for patient care. BSR was associated with decreased fall rates, and this finding is consistent with the literature (Jeffs et al. 2013; Sand-Jecklin & Sherman, 2013). Since falls occur for many reasons, it is not surprising that a single environmental scan at change of shift did not eliminate all falls. However, in one instance, nurses found a patient trying to climb out of bed during BSR and timely intervention may have prevented a fall. In the staff satisfaction survey, a nurse reported discovering a patient who had experienced a change in neurological status during BSR. It would be important to note in future studies or projects that the importance of the visual assessment component of the patient and the environment in BSR should be considered as an outcome measure.

Patient satisfaction was improved with BSR as measured by the Press Ganey® survey (Figure 4). This outcome is consistent with others in the literature (Laws et al., 2010; Evans et al., 2012; Maxson, Derby, Wrobleski, & Foss, 2012; Cairns et al., 2013; Jeffs et al., 2013; Sand-Jecklin & Sherman, 2014). The HCAHPS scores for the surgery and orthopedic units also showed a positive trend during the project. Though not statistically significant, improvements in patient satisfaction scores have clinical significance since they are value-based measures and are directly tied to reimbursement. Also, satisfied patients tend to talk about their experiences to others, recommend a facility to friends, and return as patients for future hospitalizations (Radke, 201; Mayer & Cates, 2014; Seagrist, 2013).

Implementation of BSR did not increase the average total time required for change of shift report, although individual nurses may have experienced longer report times. Nursing satisfaction surveys showed a decrease in nurses reporting that they had enough time to give and receive report. Of note, the top concern about BSR of one nurse was “patient requests during BSR,” and another reported, “…you can get stuck in the room….” Despite the perception that report took longer, many nurses commented that the extra time was worth it because they recognized the value of BSR for patient care.

BSR is a significant change to the current shift report practice and culture of most organizations, but it is associated with both improved patient safety and patient and nurse satisfaction. A limitation of this project was that the evidence-based quality improvement design prevents generalization of findings to other settings; however, the knowledge gained may be transferred to other units or hospitals.

Additionally, a system to track, measure, and evaluate the types of issues or errors found during BSR would be beneficial to further describe improvements to patient safety gained with BSR. For example, medication error reporting was not part of the project outcome measures, but was later identified as an issue discovered and mitigated during BSR. Nurses mentioned discovery of intravenous fluid concerns and possible medication inaccuracies during BSR, but these were not quantified in the audits or in the formal medication error reporting process. None of the inaccuracies were harmful or life threatening, but were the typical errors one finds in the majority of the hospitals that often may go unreported (Mayo & Duncan, 2004, Force et al., 2006). Future projects should consider exploring medication safety with the implementation of BSR.

Nursing leaders face implementation of numerous practice changes. This project focused on the immediate change period; however, maintaining the process and anchoring BSR into daily practice can be challenging. Caruso (2007), Evans et al. (2012), Cairns et al. (2013), Hagman et al. (2013), and Radke (2013) all commented on the difficulty of maintaining progress and overall sustainability of BSR. In this project, Kotter’s Eight Stage Process for Major Change (Kotter, 1996) was utilized to address the change process and facilitate ongoing compliance and sustainability of BSR on the pilot units. The final stage, called “anchoring” (p.21), is the ongoing priority for nursing leadership.

Sharing success stories... helps to encourage continued participation in BSR. Education is the beginning of obtaining buy-in from staff. Sharing success stories, such as the “good catch” of a patient who had deteriorated on rounds or improving fall rates, helps to encourage continued participation in BSR. Some staff members may initially participate but return to the nurses’ station for report unless nursing leadership continues to monitor performance and reinforce consistent expectations. When nurses explain that BSR is “how we practice,” BSR is “anchored” on your unit.

Kimberly Stephens serves as an Assistant Professor of Nursing at Waynesburg University and is the Co-Director of the DNP program.

Brenda Swanson-Biearman holds a BSN from Carlow University, an MPH (Epidemiology) from the University of Pittsburgh as an NIH training fellow, and a DNP from Waynesburg University. She is an assistant professor, and director of simulation and research in the Department of Physician Assistant Studies at Duquesne University, Pittsburgh, PA. She has over twenty years of clinical experience in pediatric endocrinology, critical care, and toxicology. Dr. Swanson-Biearman has been an educator for 17 years in both nursing and physician assistant education.

Kimberly Kerr is the Director of Nursing Professional Practice, Development & Research at Cleveland Clinic Akron General. She obtained a diploma in nursing from Massillon City Hospital School of Nursing; a Bachelor of Science in Nursing from Central Methodist College; and a Masters of Science in Nursing in Community Mental Health Administration from The University of Missouri. She holds Nurse Executive Advanced, Nursing Professional Development, and Rehabilitation Registered Nurse certifications.

Kimberly Whiteman is an Assistant Professor of Nursing and Co-Director of the DNP Program at Waynesburg University, Waynesburg, PA.